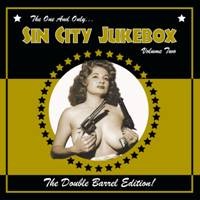 When I visited New Orleans in 2004 in struck a friendship with a cab driver named Herb H. Franklin. He showed me great record shops and restaurants and told me his interesting life story. Herb was born in 1930 in Wiggins, Mississippi, and he moved down to the coast town of Biloxi with his parents at the age of 10. He later trained to be an auto mechanic, but as he hated getting grease under his fingernails, he opted to do what he did best – hang out in bars. So in 1950 he took a bartending job at The Smithwick's – a watering hole in Biloxi, just off Beach Boulevard. When his boss retired in 1955, Herb H. Franklin became the new owner of the bar. A month of renovation followed and the place reopened in Fall 1955 as Sin City, an unofficial name, as the sign outside the bar just said "Liquor." Herb said it was a long, rectangular room with a bar on the left, chairs and tables to the right, and a stage for live music at the end. The pool tables were relocated to a side room to make "plenty of space for sinning," according to Herb. There were rockin' bands on the weekends, sweaty dancers every night, and a jukebox that was wired to the house sound system so it could be heard over the general ruckus of the bar. And that jukebox did its work until the mid-1960s, when Herb closed the place. Amazingly, however, every 45 that ever graced the Sin City jukebox remained in Herb's possession. Whenever the jukebox operator came to bring in the new tunes, Herb gave him some small change to keep the replaced ones. As a result, 15 years of serious record collecting took place, without Herb even giving it a second thought. And here are some of his tunes...