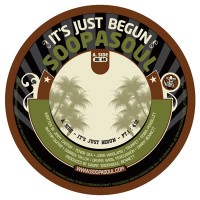 Soopasoul is most definitely a name synonymous with the UK funk 45s scene and this sought after cover of the Jimmy Castor classic – It's Just Begun is one of many records that have cement his place at the top. A record that has long been a turntablists secret weapon is given the Soopasoul treatment here with Danny dropping the drum science as well as playing the bass and his crack team of players trumpeting some serious brass action, injecting some fresh funk into this respectful cover of a classic record. This record preceded his hotly anticipated debut album 'Twin Stix' and has long remained in the bags of the DJs in the know!

Funky DestinationCome Back To Me