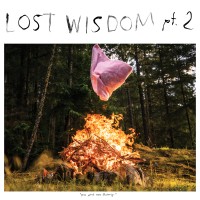 Eight new songs written in early 2019 about devotion and release. Julie graciously came back to the northwest and recorded this kind-of-sequel to the Lost Wisdom from 11 years ago. This one goes deeper. We recorded with the doors wide open and between breaths you can hear birds, jackhammering in the distance, and on some songs night air.

Barry says: Elverum returns for his second album (though the first for a LONG time), and it has moved on a little bit from the gloom of his previous two outings. Though the subject matter is a little lighter, it still deals with lost love and missed opportunities, but with Elverum's perfect songwriting and the combination of his voice and Doiron's beautiful harmonies are something to behold.