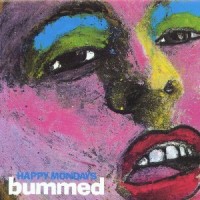 Like many an influential album in rock history, the cultural significance of Happy Monday’ Bummed was apparent to precious few listeners upon its first release on 5 November 1988. Within a decade or two, Bummed would be hailed as one of the best records of the ’80s, often by the self-same publications that had slated it back in the day – a harbinger of the seismic shift about to take place in British popular music, away from the squeaky-clean, corporately ordained pop-radio fodder which had increasingly dominated the charts since punk, and back towards the more aggressive, unruly and experience-hungry urges which had always pulsed through rock ‘n’ roll.

With artwork lovingly replicated by original Manchester designers Central Station Design, this album is on vinyl for the first time since it’s original release.

Featured the singles “Wrote For Luck” and “Lazyitis - One Armed Boxer”

Andy says: The Martin Hannett produced "Bummed" was a huge step up (and on!) from their debut record. Cavernous and rambling, heavy and churning, the tunes here were much more direct whilst the grooves were (can we say it?) BAGGY as fuck! One of Factory Records' greatest ever releases.