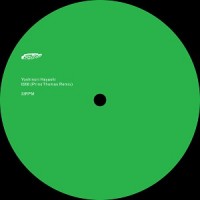 Tokyo's Yoshinori Hayashi lent his unique approach to sound design (think Romare as experienced through granular lens of a K-hole) to a slew of fire labels (Going Good, Jinn, Gravity Grafitti and Disco Halal for instance) before arriving on Smalltown Supersound for his debut LP "Ambivalence" in 2018. Now the Scandinavian label return to that experimental assemblage of library sounds, electronic textures and fringe dancefloor arrangements with a pair of remixes from Scando legends Prins Thomas and Bjørn Torske.
The Full Pupp impresario is first to the oche (we've been watching the PCD so apologies to any non darts fans) twisting "0208" into a suitably extensive, expansive and heady slice of hypno-house. The cosmic leanings of Thomas' early days remain but transformed into a super deep house chugger, built around an acid bassline and shuffling polyrhythms. As the story breaks, Thomas lets loose with the lysergic and organic elements of the original, Japanese microtonality and strange sound design, before layering an uplifting bed of synth strings to take us soaring through the mid-point. But the ecstasy only lasts so long, and soon we're wheeling through spooky idents and shadowy synth tones, heads down for a spell before the final burst of serotonin rinsing happiness.
Flip it for another long form freak-out, this time from the always brilliant Bjørn Torske. Tackling "Geckos", Torske turns out a cooly cosmic caper around the 100 bpm mark, locking in the hypnotic combo of stabbing keys, simple perx and infectious bass early, then playing with frequency manipulation, sound design and dub fx to take us to the Dagobah swamp lands. Chiming bells add their own spaced out shimmer, particularly in the chakra cleansing breakdown, before the second half spirals up into the heavens.

All killer, no filler, cosmic dancers.

Patrick says: Yoshinori Hayashi has become a go to producer for outer realm house music, and Smalltown Supersound could hardly have chosen a better pair of remixers. Thomas drops acid and ecstasy on a hypnotic cosmic house stomper, while Bjørn Torske keeps the tempo low and the vibe swampy on a stunner for the slo-mo crowd.