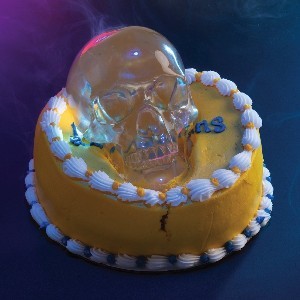 Throughout their career, Oakland’s Lumerians have consistently been a shape-shifting psychedelic force, traversing krautrock, drone, dub and jazz in their quest to create truly cosmic music. Hot off the heels of their 2018 album Call Of The Void’, the band’s dizzying space-rock opus, Lumerians have stripped things back to their raw fundamentals with the single ‘Yellowcake’. ‘Yellowcake’ sees the band trim away the fat in favour of a highly-focused psychedelic garage rock jam. Winding, contorted guitars meld with motorik drums and a rumbling bassline that stretches out into eternity. Driven by the axe wizardry of Jason Miller and Tyler Green, atop the track’s skeleton they constantly spin webs of claustrophobic Contortions-esque guitar flourishes. The single is, in the words of the band, “about someone waiting on a train platform before sunrise to go to work, staring at the city and fantasizing about what it would be like if a nuclear bomb went off." The lyrics are ambiguous at best, delivered by a careless Damo Suzuki-esque whisper from deep within the track’s dense soundscape, but the chaotic darkness of the song is on the surface for all to hear. The B-side is ‘C Rock’, an angular, krautrock-inflected cover of the 1977 song of the same name by Italian synth-pop/post-punk combo Chrisma