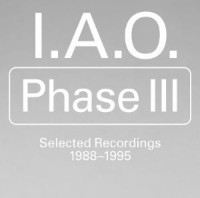 Left Ear have put together a collection of recordings taken from the elusive Berlin band I.A.O., spanning their third phase from 1988 to 1995. "Phase III" commemorates the bands final line-up of three members; Achim Kohlberger, Ralf Östereich and Carsten Zielske. The sounds on this retrospective vary widely, however, link with threads of melancholic sequences, angular jamming and a focus on electronic soundscapes.

The tracks are pinned against a backdrop of political and social unrest in Berlin at the time. Two different cities had become one with the fall of the wall, driving a bubbling subculture attempting to reunite the capital. Seemingly irrelevant to what I.A.O. was producing, these territories dance parallel to one another. In the late 1980’s, Achim Kohlberger of the band and partner Dimitri Hegemann, were orchestrating ‘Atonal Festival’, these days known as Berlin Atonal. Soon after, they set-up of one of the first techno clubs in the world - UFO, today known as Tresor.

I.A.O. cites the cast of personalities they would come across in the clubs and pubs as influential in their songwriting, artists, outsiders or the ‘general dropouts.’ However, the works of IAO far resemble techno music. Phase III’s opening track Gospel IV introduces the band with their patience and restraint, synthesizers work to reveal folding melodies. The downtempo voyage continues with Marshmallow Girls, an insight into the band’s sensitive observations and hazy imagery. All Is Bliss presents a vocal mantra cooperating with nagging bass lines and euphonic percussion. Meanwhile, two instrumentals Love and Twinkle Twinkle Twinkle Little Star both typify and defy timeless dancefloor paradigms. The compilation signs off with Ferns, binding the icy yet bright tones found throughout.

A1. Gospel IV
A2. Absublim XX
A3. Massiv XIV
A4. All Is Bliss
A5. Places Of Soul
A6. Green Earth
A7. Feel The Forgotten Sense
A8. Marshmallow Girls
B1. Topless & Shaved
B2. Drangendes Gleiten
B3. Love (instrumental)
B4. Twinkle Twinkle Little Star (instrumental)
B5. X Meets U
B6. Je Vais Bien IV
B7. Hang On
B8. Ferns