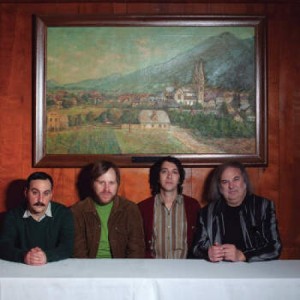 The Jay Vons have toured all through the United States and internationally, opening for such legends as Sharon Jones & The Dap-Kings, Charles Bradley & The Extraordinaires, Lee Fields & The Expressions; recorded all of their original tracks at Daptone Studios, Dunham Sound Studios, and Diamond Mine Studios with producers Wayne Gordon and Tommy Brenneck; and, while making a name for themselves, have been backing up Greg Cartwright as Reigning Sound.

The gentlemen who enjoy a fine slice, a fine libation, and an even finer haircut are known as The Jay Vons. The Word showcases how this rhythmic tour-de-force blends their love for ‘60s rock and soul with a deftness born from decades of obsessive record collecting and delivered by countless hours of writing and performing.

The lead single, “The Word,” is a veritable blueprint for The Jay Vons’ sound: spooky organ, undeniable groove, tasteful guitar, forlorn lyrics, all seasoned generously with handclaps and percussion. Just imagine if The Brothers of Soul (Bridges, Knight, Eaton) produced a session by The Young Rascals and you’re getting warm. “Night (Was Stealing from the Sun)” picks up the tempo with a fervor reminiscent of The Jam at their best — punchy drums and sweet harmonies transform this earnest tale of a misaligned affection into a dance-friendly feast for the soul. “Changing Seasons” finds the band dialing it back a bit, settling into a breezy, mid-tempo groove. The string arrangement and soft, pleading vocal give way to an explosive, anthemic chorus whose hook-heavy horn line enriches the melody, creating a perfect piece of mid-sixties pop. Other highlights include: the gorgeous ballad, “Never Take Me Back”; the full-throttle assault of “Keep On Moving”; and the flute-kissed hit “Did You See Her.” This album is an exercise in how to channel the past without ever being trite. This is no facsimile. This is The Jay Vons.
Although their roots stretch from New Jersey, Manhattan, and Long Island, their meeting was no accident. Mikey Post and Michael Catanese have been writing and playing music together since high school. They would later befriend Benny Trokan while living in Brooklyn, where Mikey would join Robbers on High Street. While all three were playing in various groups in New York, the guys wanted to start a new band together. They knew they needed that extra something. A man of speed, a man of action, a man that denies these times: Dave Amels. They would later find him on Lorimer Street, just taking in the views.