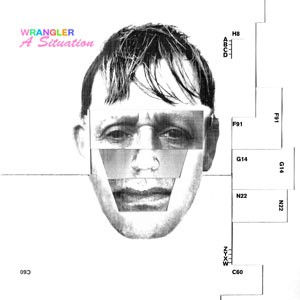 When Wrangler first formed like Voltron a decade ago, they had a very simple modus operandi. The clue was in their name. Ben ‘Benge’ Edwards (The Maths), Stephen ‘Mal’ Mallinder (Cabaret Voltaire) and Phil ‘Phil’ Winter (Tuung) would get together with a very select kit list of careworn analog synthesizers and vintage digital sequencers. Their task? To wrangle new music from the ancient equipment. These self-imposed restrictions helped produced two classic long players: LA Spark (2014) and White Glue (2016).

However the times have changed and so have Wrangler. The coming decade, which looks set to be dubbed the Terrible Twenties, may be the last time that bands actually get to release albums. Ecological collapse, climate crisis, food shortages and the disintegration of the fabric of society will mean that the slow devolution of the music industry isn’t even one of the main things that musicians (or anyone else) should be worrying about. So the trio have thrown everything into their third (but hopefully not their last) album. The result - A Situation out this month on Bella Union - is simultaneously their bleakest and funkiest release to date.

This collection of warm, reverberant, amped up tracks, that land somewhere between future music, synth pop, industrial dance, classic techno and rigid electro, captures the ambiguities of the group perfectly. Just as they use the ageing outmoded equipment that other people once chose to throw away in order to make tomorrow’s music, they are the paranoid group who (just about) dare to hope that things still might turn out OK. They cast a doleful eye across the hellscape of 2019 and state, if the end is truly nigh, then it’s never been more important to celebrate the little time we have left. And if a revolution to save ourselves is possible then we’re all in need of a revolutionary party, with a revolutionary soundtrack to match.

Even though their first two albums were released on Benge’s own MemeTune label he was unsure that he had the time and energy to release A Situation. The solution was staring them in the face however. In 2018 the members of Wrangler along with revered American musician, John Grant released Mr Dynamite on Bella Union, their debut as Creep Show. Label boss Simon Raymonde heard the tracks and loved them: Wrangler now had a new home.

For Mal it almost feels like a family affair: “I was best friends with Robin [Guthrie] and Liz [Fraser] of Cocteau Twins and when Simon joined the group I got to know him really well. I was more from a club music background but I loved what the Cocteaus did.” Phil adds that there’s no real need for them to define the difference between Wrangler and Creep Show, as the chemistry is completely different: “It’s not just John’s vocals but the way he plays synths and programmes rhythms is unique, so that music can’t help but have its own character. It’s the result of a four way democracy instead of a three way democracy.”

The album title A Situation is purposefully ambiguous perhaps referring to a job that needs doing or a nettle that needs to be grasped; perhaps referring to an unspecified event that is potentially either an opportunity or a threat. The mood is set by ‘Anthropocene’ which concerns the collapse and fall of human civilisation. As Mal points out: “If a future archaeologist digs down into the rocks they probably won’t find any human fossils, just a very thin layer of plastic and some rust patches. There’s an inevitability because the wheels have already been set in motion but that doesn’t mean we should ignore what’s going on, we should be taking care of things regardless. So this is about reaching out to other people before it’s too late rather than building walls.They’re the first fucking things that are going to fall down in the Anthropocene!”

‘How To Start A Revolution’ contains a different kind of warning. Mal says: “There was originally a little bit of irony in this track but if anything the world has become even scarier in the last two years. If you keep on pushing people there will come a tipping point and it will come back to bite you. There’s no irony left any more.” ‘Machines Designed (To Eat You Up)’ is about the fully-automated AI state surveillance that threatens us all. It looks like the future that Cabaret Voltaire warned us about over four decades ago is now finally here. Mal says: “It’s not my fault! I take no satisfaction at all in this stuff coming true. If it felt dystopian then, it feels more dystopian now. Wrangler are still questioning power but some of the tools of power have changed. I’m now fearful of Google in the same way I was fearful of Thatcher in the 80s.” Phill adds: “In the 70s and 80s if you wanted to have a go you could any weekend of the year but nowadays it’s harder to see who the enemy is and where they are. Come on out and have a go. Where are you hiding?” Benge concludes: “People are aware of the problems with Google, Facebook, 5g, social media, etc. but they’re woven into everything we do, so impossible to deal with.” Addressing the multiple failures of the internet ‘Mess’ originally had the more prosaic title ‘It’s A Fucking Mess’ which just about says it all. ‘White Noise’ is perhaps the bleakest track of all, based round a spoken word piece by Mal, inspired by a reflection on JG Ballard’s notorious and transgressive experimental novel The Atrocity Exhibition.

But Wrangler refuse to ignore the possibility of hope. The mirror image of ‘Mess’ comes in the shape of the copper-bottomed Kraftwerkian techno pop banger, ‘Rhizomatic’. In 1980, French philosophers Félix Guattari and Gilles Deleuze came up with the idea of complex connectivity between “nodes” which eerily predicted the way the internet would work. As Mal says: “It’s an uplifting song, simply because the decentralisation of technology is the one aspect of the internet that might save us.” On the track ‘Anarchy Of Sound’ the group call up perhaps their most unlikely influence to date: the ancient Greek mathematician Euclid Of Athens. Benge explains: “We’ve built weird things into this track called Euclid patterns.” Mal, who studied the history of rhythm for his PhD concludes: “They’ve been part of culture for millennia and explain African drumming as much as Elvis Presley.” But perhaps the most positive aspect of the album is hardwired into the DNA of the track ‘Slide’ simply because it stands on a continuum with the most uplifting of jacking Chicago house and the most utopian of New York garage.

Both sides of the coin - the dystopian and the utopian - are necessary for Wrangler to work. Phil sums it up the most succinctly when he says: “The heavier things get, the more I just want to jump around and have some fun.”

Barry says: It's almost like Wrangler were my answer to 'Who Would Your Supergroup Dream Team Be?', with some of the greatest musicians from 3 of the most diverse acts around electronic music today. 'A Situation' is yet more evidence of their right to inclusion, a thumping, synthy fever dream.