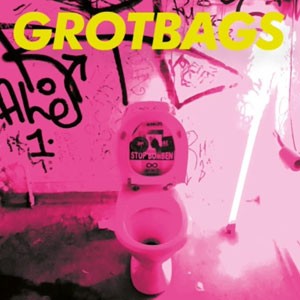 When a band proclaims themselves "The Greatest Band in the World" and nobody opposes it then it's probably true. Dipped in Gold Recordings are proud to announce the debut album from everyone’s favourite warm up act, the mighty Grotbags.

Their debut LP showcases the bands precise writing style, which sees guitarist and journeyman Morgan Lane stealing melodies from well-known hits with the band’s ‘Mike Love’ Ben Pitman picking them apart to forge at least some form of verse and chorus from it. Singer Ian Breen pens lyrics based on whatever idiotic thoughts come to mind and their world renowned pop rock sound is fleshed out thanks to the addition of saxophone and synthesizers from Beckie Davies.

This intricate process can be heard on numbers like ‘Big Baby’ where the familiar occurrence of being appalled by your mates overly large offspring is crammed into two minutes and eight seconds of pop perfection.

The album was recorded and mixed in the spring of 2019 at Edge Recording Studio in Cheshire (The Script, James Arthur, Plan B) and mastered at Abbey Road (The Beatles). Totaling twenty two and a half minutes over its ten tracks “GROTBAGS” is a love letter to all things grotty, stuffed with singalong hits covering a vast spectrum of the most important issues in society today.

The world may be going to shit (it’s probably your fault), but Grotbags are here to save us , one song at a time.

The drummer is called Nick