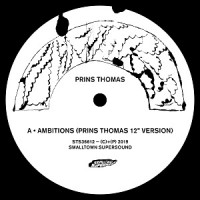 Prins Thomas released his 6th solo album "Ambitions" in 2019 - and as always with Prins Thomas the album is just the beginning of the journey. Now he is releasing two 12"s with remixes from the album. On the first 12" Prins Thomas gets remix treatment by Japan's finest DJ Nobu and Synth Sisters, as well as a new 12" version of the title track "Ambitions" by Prins Thomas himself.

We'll start with his own, alternative take; on which he decorates the stems with LFO-controlled patterns that glide between quantize settings creating that drifting sense of urgency that characterize much of the esteemed producer's output. As to that layer upon layer of lysergic gurgling and his trademark 'flapping' drum sounds and you've got a kraut-indebted concentric epic on your hands!

Matt says: Prins Thomas lets loose his "Ambitions" stems for a select group of remixers. Part one and DJ Nobu & Synth Sisters provide some sublime reinterpretations alongside a brill new version of the title track from the mainman himself! NEED.