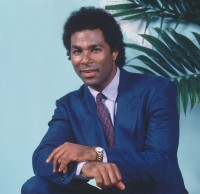 Actor/singer Philip Michael Thomas impresses yet again this time not as Detective Ricardo Tubbs on the TV series Miami Vice alongside Don Johnson, but as composer and producer of another downtempo dreamy lovers rock escapade - “Starry Eyed” - featuring melting Spanish romantic spoken word break down. Previously unreleased, originally produced in 1985, fresh from the master tapes now out for the very first time on MISSYOU.

Patrick says: Now a total silver fox (google him!) one time Miami Vice hero P.M. Thomas, had a lesser known, but equally dope recording career. Somehow this one stayed in the can way back when, but it sounds like a killer to me. Reggae for the Balearic crowd...