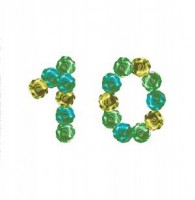 Now rightly regarded as Berlin's best party, CockTail d'Amore celebrate their tenth birthday with a triple vinyl compilation of fresh cuts from regular guests and global allies chosen by residents Discodromo. This installment features the sound of the Garden and its kaleidoscopic surges. Tornado Wallace's contribution is a fetishized Italo-High-Energy adventure with sampled vox snippets, chiming riffs and a killer acid-funk riff. On the same side the breaks of Greenvision's "Sleeping Bag In New York" conjure a clubber's hallucinations on a smashed and mashed Sunday afternoon. Bell Towers and Bon Voyage nostalgically cover the flip side. The former with synth pop inspired ode to the this special dance-floor and the latter with a classic cosmic emotional composition.

Patrick says: Oh my pie! Each of the cuts on this second blast of CDA anniversary goodness is better than the last, no matter which order you listen to them. Rampant Italo revivalism, trippy breaks and sweet, spaced out synth pop on a wicked four tracker!