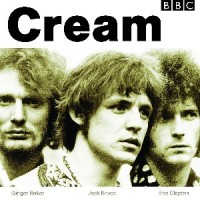 'Cream – BBC Sessions was originally released in 2003 and until now hasn’t been available on vinyl. This limited edition, numbered, coloured (white & cream) 2LP vinyl set contains 22 tracks and 4 interviews recorded live at the BBC studios in London. Between 21 October 1966 and 9 January 1968, Cream recorded eight sessions for the BBC radio network, selected highlights from seven of which are featured in chronological order on this collection. All housed in a gatefold sleeve.