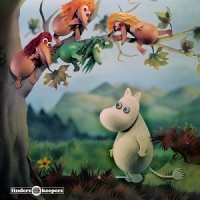 Consisting of homemade electronic and mechanical music heard exclusively via British TV speakers as an eerie backdrop for the Polish made stop- motion adaptation of the Finnish comic strip classic The Moomins. Custom-composed for radically reedited daily five-minute episodes (alongside reconstituted storylines and the narrations/impersonations of comedy actor Richard Murdoch), the short cues written and played by two Leeds based post punk avant-theatre composers helped exacerbate the programme’s bizarre spectral storylines and characters earning a firm fixture of fear, intrigue and infatuation in the hearts and memories of a slightly confused electro fed generation.

Based on the original sprites invented by Tove Jansson, the modified fuzzy felt figurines were designed by animator Lucjan Debinski at the legendary Se Ma For studios in Poland for German syndication resulting in what many regard as the definitive and most enigmatic version of the story succeeding further animated adaptations from Japan and Russia. Sharing the same nostalgia and oblique exoticism as The Singing Ringing Tree, The Little Mole, The Magic Roundabout and other reconstituted imports seen on programmes like Granada TV’s Picturebox, The Moomins and its synonymous theme tune and sound effects render this limited 7” vinyl release an essential addition to the record shelves of soundtrack collectors, domestic electronic fans and absent bygone tele-addicts as well as animation and design enthusiasts on account of its unique imagery and packaging. The single comprises an extended take of ‘Woodland Band’ and a never before heard cue from the forthcoming ‘Lost Tapes’ album.