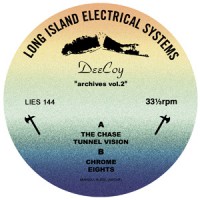 Daryl Cura aka DeeCoy has been an integral part of the Chicago underground house scene for many long years, producing numerous records and running the prestigious @eargasmicrec as well as being part of the legendary supergroup Dirty Criminals alongside Traxx and Jamal Moss. LIES present two seperate, previously unreleased archival 12"s recorded during the Criminals era in the early 2000's. This is a testament to an understated artist from the vast Chicago scene who in many ways was very much way ahead of his time...

Second part of the Deecoy excavation sees more pioneering primitive-electronix from this groudbreaking artist. "The Chase" introduces the record through bolt cutter drums railroaded at a high speed. Alien discourse decoded by human interfaces seem to characterize "Tunnel Vision" as a mixed message of bleeps and bangs peppers our inputs. "Chrome" sees tuff body music veer off slightly into more cerebral states, the perfect contradiction of body and mind working in conjecture. "Eights" concludes with some freebase acid, just in case the fiends were starting to get all scratchy. Mega stuff from this Chi-town luminary whose output seems tailor made for Ron Morelli's LIES label... Recommended!