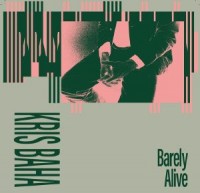 Kris Baha's first 12" for Especial. With releases on Bahnsteig 23, CockTail d'Amore and Pinkman, Baha has become a respected artist in just a few years. Building analogue equipped studios in Melbourne and Berlin, DJing, producing and mixing have all led to atonal ear, with success achieved through dedication.

Following his debut album "Palais", "Barely Alive" acts as release from these years of sweat. A call to all in this modern world, the song exemplifies a move from club music to a freedom in sound and song, as vox crash against 808 and Arp 2600. Remixes start with Timothy J Fairplay - a name synonymous with Especial. Here TJF laces his trademark echoplexxed wash for a cold wave mover. Next prodigy Job Sifre builds on his acclaimed debuts with a remodel that goes straight to that basement feeling, mixing his love of electro, new wave and industrial. To close, the legend of Das Ding creates an alternate remix, fusing his unique fuzz with Baha's ode for a brittle finale.

Matt says: Jagged, razor sharp EBM that proudly dons its goth boots and trench coat. Kris Baha is one of the tastiest shadow-lurkers in the scene. Peep dis!