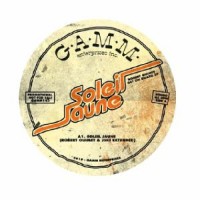 The Godfather of the Montreal disco scene, Robert Ouimet was a resident DJ at The Limelight between 1973 to 1981 and following a few choice edits on Basic Fingers last year, GAMM have cajoled him into gifting them two more of his exclusive edits.

On the A side Robert takes on a classic, "Yellow Sunshine" by Yellow Sunshine (translated in French on the release) which was a well established B-boy anthem as well as a classic cut for DJs like Danny Krivit and David Mancuso.

On the B, we find another obscure funk-disco jam packed with soulful vocals, moog synths and big disco breakdowns.

The man got chops make no mistake! Recommended.

A1. Soleil Jaune (Robert Ouimet & Jski Extended)
B1. Get On Board (with Robo)