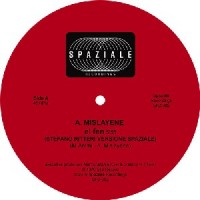 Next on the lathe for Spaziale Recordings is a fully remastered and official repress of one of THE most sought-after Arabic disco records, A. Mislayene's "El Fen". This 12" was only issued in seriously limited quantities on the tiny Stip records label out of France in 1976. Sought for the chuggy exotic rhythms of the B side "El Fen" at long last this eastern-influenced disco masterpiece is available to those who don't happen to have a spare £500!

Aït Meslayene was a Kabyle traditional singer who moved to Paris to try his luck. He was driven by an Algerian manager who pushed him to make a "disco" album, a new trend at that time. The recording found place in a studio near Paris, with an American drummer from the funk group "Ice".

For SPZ002, Viaggio Recordings head honcho Stefano Ritteri steps up to provide an exquisite “Versione Spaziale” of 'El Fen' on the A side, with the original version and 'Yemma' taking the flip.

Patrick says: If you've had an eye on the presales, you'll be aware that Spaziale are on the cusp of a frankly insane reissue schedule for 2020, beginning with the cosmic chug of this Arabic disco masterpiece. The OG is wonky, woozy and whacked out with a great chanted vocal chorus - think Magik Cykles tackle, while Stefano Ritteri's mix straightens things out a little for a heads down groover.