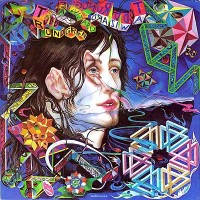 Todd Rundgren’s masterpiece "A Wizard, A True Star" has everything to offer from the American multi-instrumentalist and singer-songwriter. The studio genius recorded an album which was a significant departure from his previous album "Something / Anything?" With the money from the hit singles of this previous record he had built his own studio in New York, Secret Sound, and began recording "A Wizard, A True Star". It’s pure greatness packed in 19 tracks, which just sporadically clocks above 2 minutes each. Psychedelic drugs had a big influence on the recording process. The beauty and hysteria of the music fits the bill perfectly. Humour and superior recording techniques going together in optima forma. Yes, this is one of those rare recordings which goes into history, and it still stand the test of time.

Todd Rundgren is an American multi-instrumentalist, singer-songwriter, and record producer who has performed a diverse range of styles as a solo artist and as a member of the band Utopia. He is known for his stage outfits, experimental music and adopting computer technologies to describe his musical ideas.

The International Feel
International Feel
Never Never Land
Tic Tic Tic It Wears Off
You Need Your Head
Rock And Roll Pussy
Dogfight Giggle
You Don't Have To Camp Around
Flamingo
Zen Archer
Just Another Onion Head; Da Da Dali
When The Shit Hits The Fan; Sunset Blvd.
Le Feel Internacionale
Sometimes I Don't Know What To Feel
Does Anybody Love You
Medley
I'm So Proud
Ooh Baby Baby
La La Means I Love You
Cool Jerk
Hungry For Love
I Don't Want To Tie You Down
Is It My Name?
Just One Victory