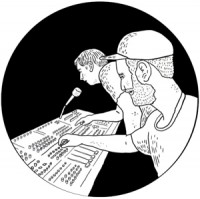 "Esok Am" should have the cosmic and Balearic fraternity literally salivating at the mouth over its low-slung intergalactic swagger. Sloppy, cocky and further decorated with an exotic vocal part - cosmic bangers don't come much bigger than this folks - form an orderly queue please!

"El Disco" hits that eastern disco vibe that's on trend and in vogue and certain to cause a carnival on the floor. Big perc rolls, melodica and bucket loads of mystique fragrence this lavish aural soup.

In a stuffed and saturated market, Mudegg look bullish and primed for investment.

Patrick says: Everyone knows I love a cosmic killer and these Mudegg freakouts flip African / Middle Eastern sounds with disco grooves, freaky synthwork and quirky percussion - This gets the full Talking Drums seal of approval!