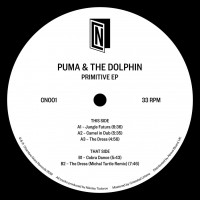 Chambre Noire Records is a new label out of Montreal, managed by Peter Bunzinelli. It is the continuation of a mix series and a radio show on N10.AS, active since 2017. For its very first release, it features Puma & The Dolphin’s debut record, the "Primitive EP", including a remix by Michal Turtle. P&TD is a Bulgarian producer based in Sofia. the Primitive EP focuses on firedance grooves, exotic percussion along with a dub and post-punk approach.


The EP opens with wild chugger "Jungle Futura". Layering jungle sounds with loose hand percussion, the mood is at the crossroads between Latin and oriental influences. As the track progresses, the rhythmic section is enriched by skippy snares and a variety of vocal samples, sweeps, and melodies, with undeniable firedance-inducing results. Darker and more synthetic in some regards, "Camel in Dub" is closely aligned to the post-punk paradigm with its bass guitar and Linn Drum groove, and dub techniques skillfully used by the producer to create a rather psychedelic mise en scène. After laying down the foundations of this plodding rhythm, satellite voices, rhythmic and melodic elements follow one another, taking the dancer on a real trip. With vocal samples and a bass guitar at the forefront interspersed with minimalist but highly efficient rhythmic elements, melodies and other bleeps & bloops engaged in ear-catching interplay, there is something loose, sensual and slightly hazy about A3 cut "The Dress".

Taking a similar yet slightly different approach to the post-punk sound of previous tracks, B1"Cobra Dance" features a catchy bassline and groovy percussion of a rather Latin persuasion, alternating between vocal samples, melodic elements, and rhythmic phrases. In a sense, this track is reminiscent of the spirit of Martin Hannett’s work with ESG, that is to say, groovy dance music that feels like the opposite of synthetic.
Highly-esteemed British producer Michal Turtle’s remix of "The Dress" is a stunner. Stripping the track down to its primordial elements and treating sounds in dramatic and psychedelic fashion creates a very mystical and trippy feeling all over the remix which feels eminently balearic but with a unique twist. Light footed and dreamy on one hand, groovy as hell and impossible not to dance to on the other, this is probably what dancing on clouds feels like.

A1. Jungle Futura
A2. Camel In Dub
A3. The Dress
B1. Cobra Dance
B2. The Dress (Michal Turtle Remix)