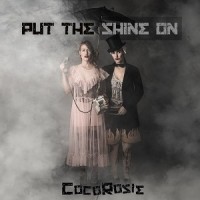 CocoRosie's 7th album—the aptly titled Put The Shine On—is a study in extremes, balancing some of the most pristine and adroit pop songs the band has ever crafted, while simultaneously exploring the most extreme states of human feeling and being—the result being an album that is both pristine and, at times, harrowing.

Put The Shine On is a record that luxuriates in extremes, reflecting the pain and confusion of mental and the anguish of unpacking trauma, while also gleefully celebrating the possibility of newness, of wildness, and the ever-present potential for transformation. Nearly two decades deep into a career marked by experimentation and bucking convention, the duo have made what is arguably their most well-considered, emotionally complicated, and sonically adventurous record of their career.

Cross-disciplinary performance artists and sisters, Bianca and Sierra Casady, aka CocoRosie. songs blend a myriad of styles and references, from hip-hop to folk and opera, shaping the most painful of experiences into memorable and evocative pop songs. They have released six albums to date: Heartache City (2015), Tales of a Grasswidow (2013), Grey Oceans (2010), The Adventures of Ghosthorse and Stillborn (2007), Noah's Ark (2005), and debut album La maison de mon rêve (2004).

Cited by The XX and Melanie Martinez as a major influence, they recently collaborated with Chance The Rapper on his 'The Big Day' album. Previous musical and artistic collaborations include ANOHNI, Devendra Banhart and experimental theatre director Robert Wilson.