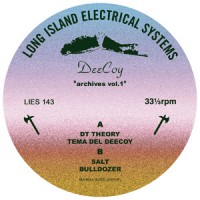 Daryl Cura aka DeeCoy has been an integral part of the Chicago underground house scene for many long years, producing numerous records and running the prestigious @eargasmicrec as well as being part of the legendary supergroup Dirty Criminals alongside Traxx and Jamal Moss. We now present two separate previously unreleased archival 12"s recorded during the Criminals era in the early 2000's. This is a testament to an understated artist from the vast Chicago scene who in many ways was very much way ahead of his time.

Much like fellow pioneer Jamal Moss, DeeCoy takes the various ghosts and tropes of dance music sordid history and breaks them down to their most primal and primitive forms. A distilled form of house music that resonates from within, unrestrained by glitz, glammer and polish. This music could exist in tribal times and is, as such, an extension of those hypnotic and repetitive rhythms our ancestors danced around too. Voodoo house music by one its true originators.

Matt says: Proto-house blueprints beated out on vintage drum boxes like cave paintings. The double-helix of the dancefloor reveals its early incarnations from another Chi-town wizard. Mega.