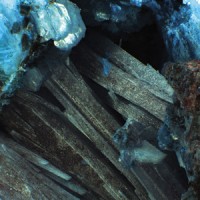 Cinematic, hyper-real soundscapes decorated by juddering, jagged contours and full spectrum synthesis evoke the vast expansiveness of the Scottish producer's homelands whilst catapulting the listener into the virtual and augmented next-worlds of the near future. The three-track EP arrives after last year’s remix of Björk and an extensive period touring his internationally acclaimed live A/V show.

The EP’s title track, "Corra Linn", takes its name from a waterfall in the Lanark area of Scotland, the water of which flows into one of the oldest hydro-electric power stations in the UK. The artwork accompanying the EP is a photomicrographic image of Lanarkite; a rare and precious mineral form. Almost all significant occurrences of Lanarkite were discovered deep within the Leadhills in South Lanarkshire, but it is said that an unknown, but large, quantity of it was once unearthed at the base of Corra Linn waterfall.

Sil says: Bar 'Featherheap' you would think that some form of alien life has entered teh rest of this ep. Electro and that new life breeding new musical forms. Adventurous minds, this is yours.

A1. Corra Linn
B1. Moo Orphaned Drift
B3. Ferthenheap