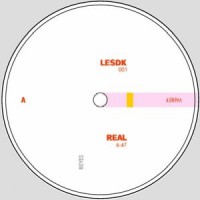 From the people who brought you Disques Sinthomme and Ghost Town comes a new imprint LESDK. Bringing back that NYC Lower East Side grime, LESDK will feature edits as well as new work from Dennis Kane and his immediate circle.

Starts off side A with "Real" - a soulful disco romp that has a gospel force as well as a powerful vocal performance. The song grooves from its first beat, and pushes the energy as it builds. The edit work here comes from one of the OG's of serious digging, Senior Reyes aka Jersey Pete.

Side B brings "Action" as its first track, complementing the A Side, this is some dirty late night Philadelphia bar nastiness, mentholated disco with a humid female vocal. Closing off the side is "Motion", a slice of cosmic funkiness that laments a love that is not happening while a thick bassline moves the proceedings along. This song has heartbreak and the haze of an early morning on the dancefloor.

Dennis Kane is a DJ and producer based in NYC, he has run the Disques Sinthomme and Ghost Town labels and is also a partner in the recording group SIREN, (with Darshan Jesrani) on Compost records.

Kane has produced numerous tracks and done remix work for Cantoma, Liz Torres, The Phenomenal Handclap Band, and Hokis Pokis among others.

He has been a DJ in NYC since the mid 90's holding down numerous residencies and touring worldwide.