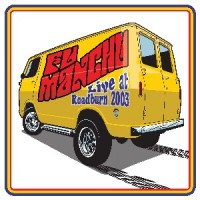 To celebrate Back To Black Friday, At The Dojo Records will be releasing Fu Manchu’s complete incendiary performance at the 2003 edition of the Roadburn Festival Netherlands on limited edition LP and CD. The band recently unearthed the original professional recordings that were taken direct from the soundboard and had them specifically mastered for this release. Scott Hill, lead vocals/guitar of Fu Manchu comments: "Playing Roadburn back in 2003 was a blast! It was the year before we put out "Start The Machine” and we played a couple of songs from it live for the first time on that tour. One of the songs that’s on this live record, “I Wanna Be,” is a different arrangement than what ended up on the final studio release. We're stoked that the show was recorded and that people will get to hear it. Always a good time playing at Roadburn!" This is a legendary Fu set including classics “Squash That Fly,” “Hell On Wheels,” “Boogie Van” and “King Of The Road.