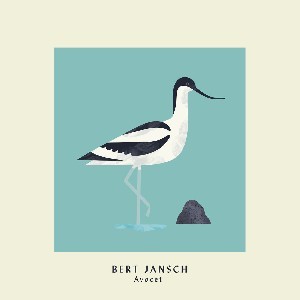 This isn’t to say that Jansch was throwing commercial success to the wind, or was unaware of his audience, more that this album feels like a uniquely personal reflection of him. (The subject of British birds is one that Jansch held close to his heart. Indeed, just preceding this album was his 1978 split 7” single with Shirley Collins - with proceeds in aid of the RSPB.) For fans of Jansch this is often the album that is singled out as his best work. The freedoms of a post-Pentangle career are much in evidence; folk rock and even trad folk give way to an album that is not only without lyrical accompaniment but really quite orchestral, classical even, in its composition. There are surprises in particular in ‘Lapwing’ (a dirge-like waltz that wouldn’t be out of place on a Nils Frahm album) and ‘Bittern’ (which speaks of Arthur Russell’s more experimental pieces). Featuring ex-bandmate Danny Thompson, alongside Martin Jenkins (Dando Shaft, amongst others) with sleeve notes by Jansch aficionado Colin Harper (author of ‘Dazzling Stranger: Bert Jansch and the British Folk and Blues revival’). This new edition also comprises three never-before heard tracks, recorded live in Italy in in 1977 (‘Bittern’; ‘Kingfisher’; ‘Avocet’), as well as Danny Thompson’s recollections of the making of ‘Avocet’, recorded by Dave Thompson (Mojo Magazine) in typical style. Remastered by Brian Pyle from original tapes.