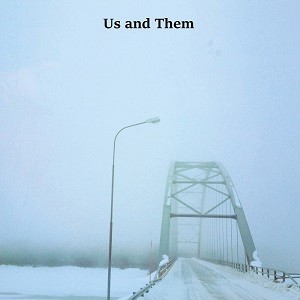 Christmas is a time to spend with family and to feel a bit nostalgic, and exactly these two aspects of Christmas come together on the single the Swedish acid folk duo Us And Them recorded for the Snowflakes Christmas Singles Club. In 'When The Stars Are Brightly Shining', the fragile vocals of singer Britt Rönnholm recapture the get-together with friends and family on Christmas Eve, the return to the place where you have spend your youth and the memories it all brings back. Multi-instrumentalist Anders Håkanson uses a wide range of instruments to built an atmospheric soundtrack to Britt's meanderings. Their version of Tori Amos' 1992 single 'Winter' is much in the same vein. In the song, Tori remembers the winters of her childhood and the bond she built up with her father during her youth. Us And Them replace the intensity of the original with the same nostalgic mood that can be found on the A-side, making the songs on this single sound as the family they are.

Us And Them are the Swedish duo of multi-instrumentalist Anders Håkanson and singer Britt Rönnholm (who also happen to be a married to each other), that came together in 2006 when Anders, who had been playing in bands since being a kid, realized that he wanted to do something different. Influenced by British folk, baroque pop and the softer side of psychedelica, he started recording songs with Britt on vocals, and this developed into Us And Them. Since the start of the group, Us And Them have released singles EP's and albums on labels like Fruits De Mer and Mega Dodo. Most records feature a mixture of covers and originals, all in the distinct dreamy, fragile and otherwordly Us And Them style, an update of the sound of psychedelic acid folk for the 21st Century.

A1. When The Stars Are Brightly Shining
B1. Winter