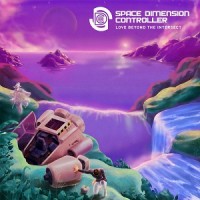 For his mother label the Belfast native has conjured up another star-gazing array of electronic tracks that skip through tempos and styles whilst always being accompanied by his trusty machines.

Following the magnificent, self-released "Redemption Of The Cryonauts", the producer is exploring his new found confidence with an intrepid focus; wandering through slinky, electro-landscapes, hurtling through 5D techno and wallowing in rich soundbeds of synthetic textures.

There's a narrative and cinematic quality to the album, as if you're exploring deep space with (real name) Jack in the cockpit and you as his trusty navigator as you cruise past disco, kosmische, boogie and electronica waymarkers, all ably reconstructed by the producer's arsenal of outboard. The refined and considered level of musicality is nothing short of breathtaking, and should ensure the album finds plenty of favour outside the immediate dance music / night club-centric worlds in which the producer / DJ has previously inhabited. An absolute masterpiece - recommended!

Matt says: He's really finding his stride now. Turning his hand to myriad styles and tempos but always with a cohension and flair that'll be familiar to his followers. He's still got plenty more to give (judging by his fresh faced press shots anyway - Ed) so we're just enjoying the journey with this incredible artist.

A1. Burnout (Dawn)
A2. PVLN
A3. Voices Lost To Empty Space
B1. Alone In An Unknown Sector
B2. Intersect Encounter
B3. Early Steps
C1. Gifted Sentience
C2. Slowtime In Reflection
C3. The Cost Of Clarity
D1. Sundown On Memory Point
D2. Love Beyond The Intersect