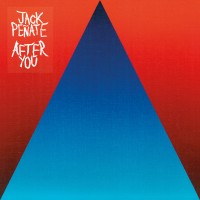 Over a decade in the making, ‘After You’ was produced in collaboration with Paul Epworth, Inflo and Alex Epton. Prayer, the first single from the album, features Peñate playing several instruments, as well as the production credit he set out to achieve. It carries more than a nod to gospel, all set around a glorious pop hook, played on a Farfisa organ. Its musical and lyrical complexities belies the fact it was written in twenty minutes. “Once we had written it, all the pieces of the past ten years fell into place. It was like a puzzle coming together.”

Former Spankrock member turned producer and jazz drummer, Alex Epton came on board and set to bring together 10 years worth of work into a cohesive album in XL’s New York studio, adding in additional programming and production as well as drums and percussion. Paul Epworth, with whom he created Everything Is New, came back in and worked on several tracks.

The album doesn’t just draw on his musical journey of the past ten years, it brings in influences from the music he heard as a child. Loaded Gun has a prechorus that Lennon and McCartney would have liked to have written. As a child his brother would play him Jungle music. There’s elements of that too. His dad ran acid house raves – that’s in there. But perhaps, the most poignant track is Gemini. With nothing more than piano, vibraphone and drum beat, the words of Peñate’s grandfather, the writer and artist Mervyn Peake, are read by his uncle Fabian. And it’s not the only family tie. The artwork for the album, and the first video, has been done by Peñate’s cousin, the acclaimed artist, Eddie Peake. “We both grew up with an uncanny focus on what we wanted to do, but had never worked together,” says Jack. His work is both incredibly joyous and melancholy, and it does something to me that music does to me too.”