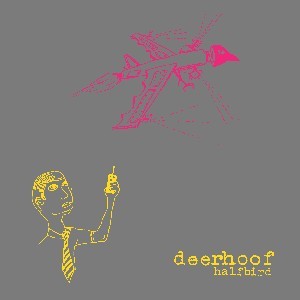 Recommend If You Like: DEERHOOF (!), Blonde Redhead, Sonic Youth, Stereolab, Animal Collective, Liars, Lightning Bolt // “...the best band in the world...” Pitchfork // Deerhoof and Joyful Noise Recordings will issue the first ever vinyl edition of the band’s third LP, Halfbird. Originally released in July 2001 by Menlo Park Records, Halfbird is 14 tracks of playful absurdity and pummeling energy, featuring founding member Greg Saunier (drums - guitar - vocals); Satomi Matsuzaki (vocals - bass); and Rob Fisk (guitar). 2019 sees the 25-year anniversary of Deerhoof being a band. To celebrate the occasion, three labels that have worked with Deerhoof over the course of their expansive and colorful career will each reissue one of the first three Deerhoof LPs: 1997's The Man, The King, The Girl (Polyvinyl); 1999's Holdypaws (Kill Rock Stars); and 2001’s Halfbird (Joyful Noise Recordings).

Barry says: One of Deerhoof's classics gets the reish treatment, and the timind couldn't be better. What else could you want in these troubling times than a slab of grooving, psychy noise rock.