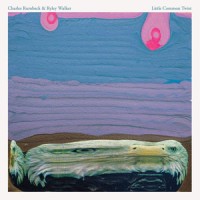 Charles Rumback and Ryley Walker are both known for their creativity and curious spirits. Rumback is a drummer in high demand in Chicago’s free-jazz circles and a pillar of the second wave of improvisers in a scene first shaped by the legendary players like Sun Ra and other members of the AACM. Walker draws deeply on other distinctly American styles, bringing a strong sense of folk tradition to his playing that is as arresting as his freewheeling performance style. Together, Rumback and Walker find common ground in their kinetic, intuitive playing and yearning creative outlook. ‘Little Common Twist’, their sophomore release as a duo, finds both players at their most adventurous. It compiles instrumental pieces that convey a striking range of emotions, at once introspective and expansive, with a delicate interplay that delights as they move with ease across a spectrum of styles.

The recording has a pastoral quality that recalls Van Morrison’s classic album ‘Veedon Fleece’ and captures a remarkably dexterous performance by both Charles and Ryley that make this album so expansive and fresh.

‘Little Common Twist’ was recorded over several sessions throughout 2017 and 2018 with producer John Hughes, capturing the duo playing in the moment with minimal overdubs. The guitar and drums duo eschewed each instrument’s traditional roles of rhythm and melody, experimenting with texture and rhythm. This album is the culmination of a creative partnership that has seen Rumback and Walker constantly challenging each other. In stretching the bounds of their interplay even further than before, the duo created their most evocative and expansive work to date, conjuring the afterglow of sun-scorched landscapes and ethereal after-hours ambiance.

Barry says: We're massive fans of Ryley in here, a personal shop highlight being his acoustic instore some years ago, and this is a brilliant collaboration with Jazz drummer Rumback, both making their sounds obvious while working in perfect tandem with the other. Grooving, freewheeling psychedelic folk with jazzy timbres and progressions, both beautiful and rousing in equal measure.

Half Joking
Self Blind Sun
Idiot Parade
And You, These Sang
Menebhi
Ill-Fitting/ No Sickness
If You’re Around And
Down
Worn And Held