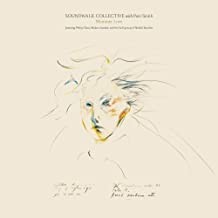 A sonic cross-continental experience, ‘Mummer Love’ is the second album in the ‘Perfect Vision’ triptych collaboration between Soundwalk Collective and Patti Smith.

For this body of work, Soundwalk Collective journeyed to Africa to explore the intricacies of Arthur Rimbaud’s most obscure period. After leaving France and what he deemed the ‘Western stagnation’, Rimbaud found himself in Harar, Ethiopia - an epicentre of Sufism in Africa. Sufi practise focuses on the renunciation of worldly things, the purification of the soul and the mystical contemplation of God’s nature. A strand within the wider Islam religion, it focuses on spirituality, meditation and chanting sessions.

As with the other albums in the triptych, the Collective searched for hidden, earthy sounds that hold memories and embed existence. For ‘Mummer Love’ they also found themselves recording under the tree where Rimbaud photographed the shrine of Sheik Abadir Umar ar- Rida al Harari, the founder of the holy city Harar. “As the rain fell, I wondered if I was hearing the drops hitting the leaves the same way Rimbaud did 140 years ago,” Stephan Crasneanscki from Soundwalk Collective says. These sounds and Sufi chants are juxtaposed with Patti Smith’s poems, like the title track ‘Mummer Love’. Written to Rimbaud, Smith’s words are rooted in multiple aspects of the self: from the passion of a lover to the care of a mother and everything in between.

Further contributions to the album come from Mulatu Astatke (widely considered the father of Ethio-jazz) and Phillip Glass, who has long felt a connection to Sufi music, coming together and evoking a call and response between piano and vocals of the Sufi masters. It is simultaneously the first time Glass collaborates with Smith and so Harar becomes an extraordinary meeting place for all to celebrate the beauty of Rimbaud’s work.

‘Mummer Love’ is released around the anniversary of the death of Arthur Rimbaud (10th November 1891).

The KillsList Of Demands (Reparations)