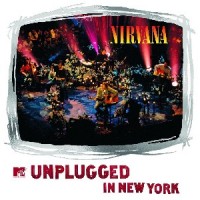 Named one of the 10 best live albums of all time by Rolling Stone, MTV Unplugged in New York was recorded live at Sony Music Studios in New York City on November 18, 1993. The show was directed by Beth McCarthy and first aired on the cable television network MTV on December 14, 1993. As opposed to traditional practice on the television series, Nirvana played a setlist composed of mainly lesser-known material and cover versions of songs by The Vaselines, David Bowie, Meat Puppets (during which they were joined by two members of the group onstage), and Leadbelly.

Expanded to include 5 rehearsal performances previously only available on DVD, the anniversary release also features an exclusive gatefold jacket including anniversary silver foil detail on the front and back cover.

Side C
Plateau
Oh Me
Lake Of Fire
All Apologies
Where Did You Sleep Last Night?