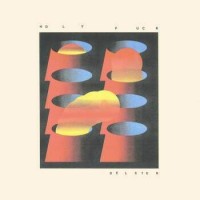 Holy Fuck have today announced details of new album 'Deleter', which will be released on January 17th and is further previewed with the video for acclaimed latest single 'Luxe' (ft. Alexis Taylor). Having just concluded a US tour alongside Hot Chip, the seminal Canadian band will play a selection of European headline dates later this month (with a London show at Moth Club on October 23rd selling out immediately).

From the thrusting minimalism of opener ‘Luxe’ through to the triumphant chug of closing track ‘Ruby’, via club-ready rollocker ‘Free Gloss’ and the cosmic clatter of ‘San Sebastian’, Deleter is a record that joins the Holy Fuck dots within their widescreen, technicolour, crescendo- heavy sound.

Barry says: It's been too long since the last Holy Fuck outing, but when a return shows this level of refinement and furthering of the sound we all expected from them in the first place, it's all worth it. Huge electronic throbs and hypnotic kosmische pulses shine through, all underpinned with a more commercial sensibility and even the unmistakeable vox of Alexis Taylor making an appearance.