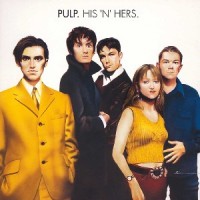 'His ‘n’ Hers is the fourth studio album by Pulp and was the first to be released on a major label. It was originally released in 1994 and together with its follow-up Different Class, it is one of the highlights of 90’s ‘Britpop’.
Its influences emanate from old glam and post-punk records, with the hooks and immediacy of perfect pop — it was sensual yet intellectual, cheap yet sophisticated, retro yet modern — with each seeming paradox giving the music weight instead of weighing it down: with Jarvis Cocker’s wry comments on life in Sheffield, where desperation, sex, and crime are always on the surface, creating evocative images with an appropriate amount of drama and a surplus of flair! The album contains their first top 40 hit in the UK – Do You Remember the First Time? and Lipgloss.