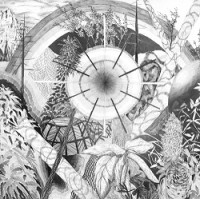 REISSUED!!! The beloved Dog Poison full-length record by THEE OH SEES, and boy, is this one a monster. More layered and textural than the previous Oh Sees releases while keeping all the typical JOHN DWYER punch, oomph and weirdness. Ten fantastic songs originally released by Captured Tracks in 2009. "If it were approached from a different angle, a song like album opener "The River Rushes (To Screw MD Over)" might not have sounded out of place on Dog Poison's predecessor. But by switching to an acoustic guitar and letting the flute player channel Ian Anderson, Thee Oh Sees give their sound a new wrinkle. Indeed, with Dwyer copping a few vocal moves from Mark E. Smith, "River" ends up sounding a little like the Fall covering the Kinks. There's another, purer, Kinks-like turn on Dog Poison, with the loping high-pitched tra-la-las of "The Sun Goes All Around" sounding like something left on the cutting room floor from Village Green Preservation Society. Elsewhere on the album, the group emulates the cavernous, smoky gait of Deerhunter ("Head of State"), shambles in a folkier fashion ("Fake Song"), spaces out a bit ("Dead Energy"), and mostly just lets it all hang out over the course of this LP's 24 minutes."—Pitchfork