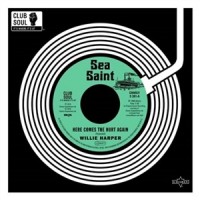 An original ‘clash single’ featuring two Alan Toussaint teammates going head-to-head on one northern soul classic including Willie Harper’s superior version on 7” vinyl for the first time inspired by the new 16-track all-nighter LP. The All-Nighter has been an integral part of “the scene” since the phrase Northern Soul first came into popular use following the now legendary Blues & Soul article entitled “The Up-North Soul Groove” in June 1970 by journalist Dave Godin (issue no.36). During the heyday of the Northern Soul scene the All-Nighter was the preferred format for the travelling soul fan. It separated the scene’s top venues from the hundreds of regional soul nights in pubs, clubs and community halls across the land. The All-Nighter was the ultimate experience and the only place to hear the best, the rarest and the breaking sounds spun by the leading DJ’s.

Willie Harper’s originally unreleased recording of the Toussaint dance classic “Here Comes the Hurt Again”, a feature track on the All-Nighter compilation, is put into direct competition with its B-side recording from Lee Dorsey of the same track on this new 7” on Club Soul. Both recordings have recently been remastered for a sound that will take Soul revellers back to the heat of ‘60s dancefloors as though it were yesterday. Presented on dinked vinyl in single sleeve packaging.