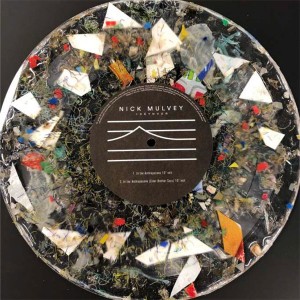 In collaboration with Nick Mulvey, Sharp’s Brewery is making music that will protect British coastlines from plastic pollution and reduce single plastic usage, in a music industry first. The Cornish Brewery and the Mercury Music Prize nominee have today released the first track pressed onto a record made from recycled plastic, which has been washed up on Cornish beaches.

Sharp’s Brewery and Nick Mulvey announced the first of its kind collaboration with the launch of the track, titled In the Anthropocene. Lyrically the song explores themes of responsibility and freedom in this time of urgent ecological and social crisis (and opportunity), aka ‘the Anthropocene’.

Proceeds from the track, including from sales of the limited-edition record pressed onto recycled plastic and digital streams*, will go to Surfers Against Sewage to help protect the Cornish coastlines from pollution, including plastic waste.

The launch of this innovative new ‘ocean vinyl’ comes after last year’s signing of ‘Keynvor’, the music artist’s name given to the Atlantic Ocean, by Universal Music.

The music industry is blighted by sustainability challenges from tackling single-use plastic cups at gig venues to unsustainable vinyl production practices. The new campaign from Sharp’s Brewery, and the first playable track made from recycled ocean plastic aims to give music lovers the chance to own something that’s made out of ‘single use’ plastic, that they’ll treasure forever.

Nick Mulvey, Singer-songwriter: ‘’I've always loved the wildness of the Cornish coast and it feeds something deep in me every time I'm there. My music is about knowing who - or what - we are, right at the core. Aliveness itself, conscious. These times of urgent global crisis are demanding we re-examine ourselves and the world and raise ourselves, individually and collectively, to match the Earth, this wonder-organism from which we are not, and never have been, separate.

Hugo Tagholm, CEO of Surfers Against Sewage: ‘We are excited to be partnering with Sharp’s Brewery again to raise vital funds to protect our coastlines from plastic pollution and other environmental hazards. Keynvor, as a musical artist, and the new ‘ocean vinyl’, which uses plastic pollution and turns it into something positive, is a powerful way to help us raise money and continue to spread our message.’