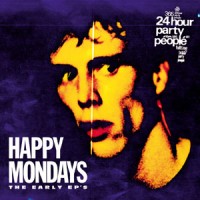 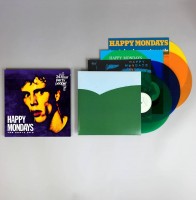 This collection of EPs features very early, rare Happy Mondays tracks originally released on limited vinyl in the late 1980s by Factory Records. Included is the original version of ‘24 Hour Party People’ and feature track ‘The Egg’ - with atmospheric eerie slide guitar and driving bass this is a stand out gem from the band’s back catalogue and transports you in time to late 1980s Manchester.

All 4 EPs are gathered in a 300gsm carton slipcase.

Andy says: Happy Mondays lit up the late 80s with their barely contained, shambolic but groovey take on punk-funk and god knows what else! They were, in short, totally original. In frontman Shaun Ryder they had a complete one-off who label boss Tony Wilson famously compared to W.B.Yeats! These early twelves (85-88) are presented here as four different coloured vinyl, remastered from the original analogue tapes and housed in a 300 gram carton slipcase.

Forty Five :
A. Delightful
B1. This Feeling
B2. Oasis