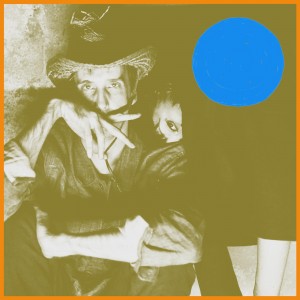 As sure as if it had been mapped in the stars, or written in a prophecy buried deep beneath the sands of the Marfa desert, a collaboration between Cate Le Bon and Bradford Cox was always something of an inevitability.

For both artists, Myths 004 signals a change of tack: meticulousness thrown to the wind as spontaneous, jammy tales of firemen and 5p plastic bags, unbrushed hair and shoelessness and makeup-daubed landscapes–all miraculously written and recorded in just one week– roll effortlessly off their cuffs.

Though this EP materialises after two individual 2019 album campaigns–Le Bon’s Mercurynominated fifth album Reward, and Cox’s eighth with his band Deerhunter, Why Hasn’t Everything Already Disappeared? (which Le Bon co-produced)–the chronologies are tangled: Myths 004 is in fact a snapshot of the pair’s very first meeting. After years of admiring each other’s work from afar, Cox and Le Bon finally converged on Marfa, Texas in 2018, at Mexican Summer’s annual Marfa Myths music, visual art, and film festival.

“Marfa is an extraordinary town,” says Le Bon. “It feels like nothing else exists when you’re in it which is both comforting and unnerving.” In this otherworldly enclave, and with a band of frequent Cate Le Bon co-conspirators on hand to putty the gaps with drums, saxophone, percussion, keys, and additional guitar (Stella Mozgawa of Warpaint, Stephen Black of Sweet Baboo, and Samur Khouja), the EP was assembled whiplash-quick.

“Writing and recording in a week is a tall order - especially when such chemistry exists between all the musicians involved, and the possibilities are boundless,” Le Bon explains. “We committed ourselves to embracing the chaos, surrendering to all moments and moods that travelled through. It’s a crude holiday scrapbook shared by all involved, an amalgamation of the changes in mood and light that shaped the days.”

Indeed, Myths 004 is wondrous in its variety. On the opening song “Canto!”, Cox dons the illfitting leathers of an ageing biker and urges us to come ride with him, baby. He and Le Bon gaze into one another’s eyes with semi-serious sweetness as tough, wiry guitars stab through the romance.

Everything shrinks and softens on the EP’s sole single, the gently melancholic “Secretary,” as Le Bon and Cox spout verse over a mysterious percussive rhythm; perhaps made by miniature cymbals from a mantric parade, perhaps by someone rummaging in the cutlery drawer. Together, they combat the office humdrum of filing, answering the phone, and eating “the same old plastic lunch” with a surreal and beautiful daydream of “mascara brushed across the plains / all of the phone calls you made disconnected.”

“Fireman” sees Le Bon and Cox cast themselves as postulating heroes, as in a flash of tongue-in-cheek, lyrical-comic wordplay, Cate sings “I am a fireman / putting out fires, man” and Bradford, in a low faux-macho drawl, rambles immodestly in the background about his fire-extinguishing prowess.

And final track “What Is She Wearing,” drips with cynicism, wit, and parody punk spirit as Le Bon lists universally relatable and not-so-nice, day-to-day shit: having to take the bins out, stepping in chewing gum, taking your jumper off when you’re wearing an ugly t-shirt underneath, finding dirt on the fork at a fancy restaurant, going to the supermarket and paying five pence for a plastic bag you don’t want. It wouldn’t be hard to believe that John Cale is sawing his bow across an electric guitar somewhere in the background as Le Bon lippily gripes: “I’m walking to get myself a croissant from the bakery / and everybody is looking at me as if I have committed a crime.”

But for all their twists and turns, Myths 004’s seven tracks sit perfectly alongside one another - each sounding simultaneously like a Bradford Cox song, and like a Cate Le Bon song. In the true spirit of collaboration, a feeling of sheer joy prevails, uniting the EP’s every shape, character, prang, plod and playful bite.

SIDE A
1. Canto!
2. Secretary
3. Companions In Misfortune
4. Constance