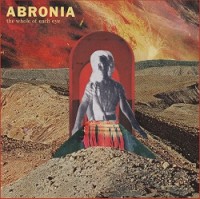 Cardinal Fuzz and Feeding Tube Records are proud to bring to you the latest long player from 'Abronia' (Portland USA) The follow up to their debut, The Whole of Each Eye sees Abronia cementing its very singular place in the canon of the broader psych rock universe. A six piece consisting of two guitars, electric bass, tenor saxophone, pedal steel, and one 32” inch bass drum (no drum set here), Abronia pulls from kraut rock, spaghetti Western soundtracks, doom, 60’s UK folk, spiritual jazz, ritualistic drone, and infuse it all with the arid haze of deserts near and far. Recorded, as the first album was, at Type Foundry in Portland, but mixed this time by Billy Anderson (known for his work with Sleep, OM, Neurosis, and many other heavy legends), the band builds off of the solid foundation of the first album.


There are still hooks and visceral, crushingly satisfying payoffs, but there’s a deeper complexity to these arrangements that rewards careful listeners and searchers. And while almost half of the last album was entirely instrumental, you’ll find no purely instrumental tracks on this one. This time Keelin’s voice has come to the forefront–a deep and deadly force that brings to mind Nico, Grace Slick, Jarboe, Malaria’s Bettina Köster, and White Magic’s Mira Billotte. Note the dynamics–from the subdued falsetto on the first half of “Cauldron’s Gold” to the murderous scream at the end of “Half Hail.” Another obvious change if you read the liner notes–three of the six members have switched out since the last album, which would seem like a big deal if it hadn’t happened in such a staggered and organic way.


Rick Pedrosa is deeply part of the crew by this point–he joined the band on pedal steel a month after the first album was recorded (September 2016)–replacing the lap steel player–Andrew Endres, Paul Michael Schaefer replaced Benjamin Blake on guitar just after the album release show (July 2017). Shaun Lyvers is the newest member–replacing the continent roaming Amir Amadi on bass in spring of 2018. Abronia is very much a band. Songs are written together at practice with everybody contributing.