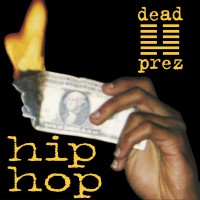 Re-issued. The debut album by dead prez, Let's Get Free, had plenty of head nodding beats, but none quite matches the nerve grinding effect of their single "Hip-Hop". Produced by the duo, "Hip-Hop" was a record that immediately caught fire on both College and Commercial Radio mix-shows. A call to arms, “Hip-Hop" just sounds like a revolution, and is to be heard loud! Surprisingly enough, this song's legacy may be most defined by its use as the bed for Dave Chappelle's entrance music for his show on Comedy Central. But beyond that, this song remains as one of the greatest Hip Hop songs of all time.

Patrick says: ANTHEM! That's the word that springs to mind. A neck-napping head nodder with a KILLLER B-line and lyrical content with glides between the conscious and the streetwise. Buy it now!