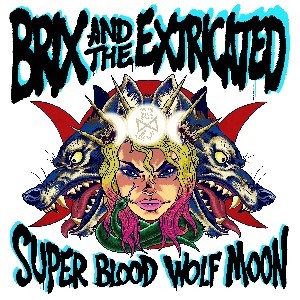 Honouring the prolific output that is historically embedded in the DNA of this band, Brix & The Extricated release their third studio album in as many years. 364 days after the release of their second record “Breaking State”, the band have changed gears once again. This album sees the band decimate dimensional boundaries resulting in a body of work that is sure to resonate. Super Blood Wolf Moon is both challenging and addictive in equal measure. This record shows growth of a band who have stepped clearly out of the confines of the shadow of the past. At times it touches on dark emotional pain and at other points reaches euphoric bliss. This is an album that has diversity with a focused thread throughout. The record combines top level musicality with deep hypnotic grooves and elements of unforgiving brutality. As has come to be expected this record is loaded with melodic hooks, riffs and infectious choruses. These musical devices however simply act as a portal to the beating heart of this band which is the art of songwriting itself. The guitar work is at times dangerous, edgy and transcendent. The conversational relationship between Jason Brown and Steve Trafford shows a high level of musical intelligence and an intuitive sense of freedom.

The legendary Hanley Brother rhythm section are true to form as the engine room of this band. Additional strings and harpsichord arranged by Sarah Brandwood-Spencer bring a rich spectral elegance. Lyrically Smith Start speaks honestly about the uncomfortableness of depression, drug addiction, death and loss. There is more social commentary on this record than its predecessors with songs like “Dinosaur Girl” (over medicating culture), “Strange Times” (global feeling of despair) and “Wasteland” (climate change and destruction of the environment). Smith Start reflects on pack mentality and the freedom to show your scars in the song “Wolves” and the juxtaposing “Crash Landing” deals with drug overdose and suicide. The album closes with the epic, glorious and deeply moving “The God Stone” which breaks all bounds of expectation.

Barry says: More superb material here from Brix & The Extricated, with equal moments of fiery, melodic punk and delicate, well-woven melodies. Understandably political but without ever losing their focus on huge, anthemic tunes. No shortage of talent here, and we can only hope they keep them coming!