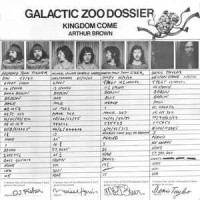 Officially licenced, fully remastered and presented with the original gatefold sleeve artwork. As an added bonus a reproduction of the rare 2 sided poster that was only with the initial run of copies is included.

Swordfish proudly continues its reissue programme of vintage Arthur Brown recordings with Kingdom Come's classic 1971 debut. A stunning fusion featuring elements of psychedelia, prog and electronics. Whilst not a major commercial success at the time in terms of pioneering spirit it has become something of a landmark. Now some 45 years later the driving forces behind it are far clearer-a remarkable visionary work full of genuine progressive portent.