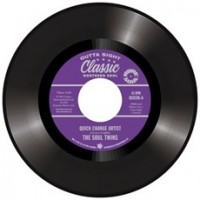 The Soul Twins, real life siblings Hal and Harold Degraffenreid, were Detroit’s answer to Sam and Dave. “Quick Change Artist” thundered onto the U.K. Northern Soul scene at the Torch All-nighters in Stoke-on-Trent and little wonder since it was recorded by Johnny Griffith for Ollie McLaughlin’s Karen label and features the Funk Brothers on backing. N F Porter was born Nolan Frederick (NF) Porter in Los Angeles in 1949 and is best known for “Keep On Keeping On” his third and final single for Gabriel Mekler’s Lizard label. It was released in America in 1971 and found its way on to the U.K. Northern Soul scene via The Torch all-nighters in Stoke-on-Trent where it was first played as a new release, and later at the legendary Wigan Casino.