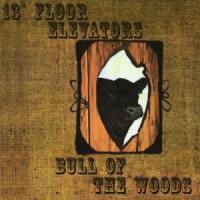 During a turbulent time for the Elevators, caused by drug issues and incarceration for vocalist Roky Erickson, lead guitarist Stacy Sutherland ran the recordings for these two albums, featuring a frequently-changing line-up. The result is this fine post-psychedelic rock album in ‘Bull of the Woods’, which features on Disc 2. The first disc is dedicated to the lost ‘third’ album; ‘A Love That’s Sound’ features alternate recordings taken from the original acetate, 2-track master and multi-track masters. Audio restoration and final mastering to disc was handled by Andrew Thompson at Sound Performance in 2008. The remastering and remixing were completed in 2007 by Walt Andrus and was engineered by Stuart Sullivan.

Genre-defining, pioneering, unique and utterly timeless, The 13th Floor Elevators continue to influence and inspire new generations of musicians. R.E.M., The Jesus And Mary Chain, Primal Scream, ZZ Top, Spacemen 3, Echo and the Bunnymen, Julian Cope and many more have covered their songs. On 10th May 2015, the surviving members of the band (Roky Erickson, Tommy Hall, Ronnie Leatherman and John Ike Walton) performed a 50th Anniversary reunion concert at the Austin Psych Fest. So significant was the event, it was covered by the media worldwide and in the band’s honour, the name of the festival was changed to Levitation - a key track from ‘Easter Everywhere’.

CD 2:
Livin’ On / Barnyard Blues
Till Then
Never Another
Rose And The Thorn
Down By The River
Scarlet And Gold
Street Song
Dr Doom
With You
May The Circle Remain Unbroken