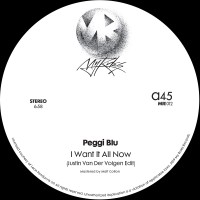 Back in 2009 My Rules label owner Justin Van Der Volgen released a mix cd done completely with his own edits titled Try To Find Me Vol 2.
The mix was received incredibly well and had fans scrambling for years to try and spot the track list. It earned a 4.5 review on Resident Advisor, and had a certain rather known and respected DJ opening their sets with it.

Since then the status has only grown and is now considered by some one of the best mixes of all time.

So to mark the 10 year anniversary Justin has decided to finally release two of the most requested edits from it. On the A-side you get a high powered vocal cut from Peggi Blu which comes on like a lost Chaka Khan anthem. Big bassline, mad fx and screaming lyrics qualify this party starter for tops and bottoms off status. Flip over to the B side and you'll find Gregg Diamond's charging string-laden disco trip stripped back into a hypnotising euphoric roller. Two peak time cuts not to be missed, fully licensed and sure to soar.