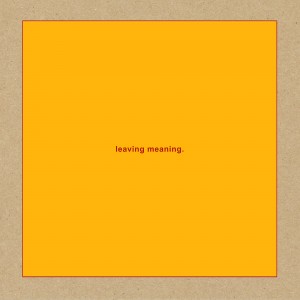 'Leaving meaning.' is the band’s fifteenth studio album, the follow up to 2016’s 'The Glowing Man'. Written and produced by Michael Gira, the album features contributions from recent and former Swans, members of Angels of Light as well as Anna and Maria von Hausswolff, Ben Frost, The Necks, Baby Dee and Jennifer Gira.

Michael Gira explains, “leaving meaning. is the first Swans album to be released since I dissolved the lineup of musicians that constituted Swans from 2010 – 2017. Swans is now comprised of a revolving cast of musicians, selected for both their musical and personal character, chosen according to what I intuit best suits the atmosphere in which I’d like to see the songs I’ve written presented. In collaboration with me, the musicians, through their personality, skill and taste, contribute greatly to the arrangement of the material. They’re all people whose work I admire and whose company I personally enjoy.”

Barry says: Michael Gira is a man who clearly can't quit (nor should he). Having given up on the band a number of times, in the midst smashing out some truly amazing albums, he always returns. This iteration of the band includes all the sounds we'd expect from Gira but bolstered by the perfectly selected cast of collaborators and co-conspirators.

LP
A1 Annaline
A2 The Hanging Man
A3 Amnesia
B1 Leaving Meaning
B2 Sunfucker
C1 Hums
C2 Cathedrals Of Heaven
C3 The Nub
D1 It's Coming It's Real
D2 What Is This?
D3 My Phantom Limb

CD
CD1
1 Hums
2 Annaline
3 The Hanging Man
4 Amnesia
5 Leaving Meaning
6 Sunfucker
CD2
1 Cathedrals Of Heaven
2 The Nub
3 It's Coming It's Real
4 Some New Things
5 What Is This?
6 My Phantom Limb